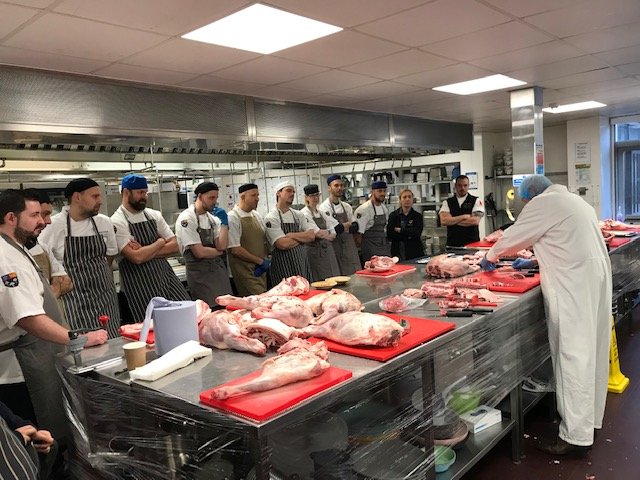 Eton College Bekynton is part of the Sodexo account and the Butchery Masterclass was organised by Steven Wylie the Group Executive Chef for Eton College and Dorney Lake along with James Bourn-Head Chef. Our Master Butcher, Kevin Bleasdale, together with Andy Woods, one of our National Account Managers, ran the day.

They demonstrated to a team of 15 culinary chefs the Lamb Experience, braking down a whole carcass and showing them carcass utilisation and the different cuts available from further processing the three main primals,Legs,Shoulders and the Saddle.

They also involved the chefs in a practical session in which they were all given a full bone in chump on leg at their work station to butcher themselves with the help and guidance of course from Andy and Kevin. This included trimming, boning the legs and further processing by seam boning and showing the benefits and different cuts available from further processing.

Eton was founded in 1440 by King Henry VI as “Kynge’s College of Our Ladye of Eton besyde Windesore” to provide free education to 70 poor boys who would then go on to King’s College, Cambridge, which he founded 1441.

When Henry founded the school, he granted it a large number of endowments, but when he was deposed by Edward IV in 1461, the new king removed most of its assets and treasures to St George’s Chapel, Windsor, on the other side of the River Thames. Construction of the chapel, originally intended to be slightly over twice its current length was stopped hurriedly, but by this time the chapel in its current form and the lower storeys of the current cloisters, including College Hall, had been completed. With reduced funds, little further building took place until around 1517 when Provost Roger Lupton built the tower which now bears his name together with the range of buildings which now includes Election Hall and Election Chamber.