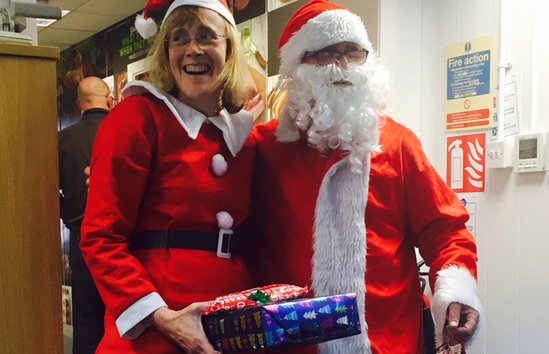 A Christmas tale of the not so Secret Santa and his little helper.

Twas the night before Christmas
the warehouse was still,
our arms filled with presents
and glasses to fill.

We shouldn’t be working
at this time of year,
but Santa and his ‘little’ helper were coming
full of good cheer.

Glenn was sorting the music when he
heard a strange sound and came out
of his office with a leap and a bound.

The excitement was building,
you felt it all round
when Santa and his helper
appeared with presents abound.

One for you and for me
but who was it from.
Is it Steve, maybe Mark, or more likely Matt
Because he knows I’d definitely like that.

The secret was out
and gifts flowed more and more,
the staff and our helpers
left smiling as they ran
through the door.

Merry Christmas and a Happy New Year to everyone at Birtwistles.
And a special thanks to Santa & his little helper for taking time out of their busy schedules.